In a previous post I looked at Don Carlos was almost a king of Spain. But attention should also be paid to his maternal uncle, Joao Manuel of Portugal. Like Carlos, Joao was a victim of the royal families’ penchant for inter-family marriages.

Joao Manuel was born on 3rd June 1537 at the beautiful Portuguese Palace of Evora. He was the eighth of nine children for King John III of Portugal and his wife Catherine of Austria. But despite Catherine’s prolific fertility the royal nursery was actually quite empty at his birth. Of the seven children born before him just two were still alive. Princes Denis and Manuel had died in the months before his birth, and Afonso, Isabel, and Beatriz had all died in their first year. 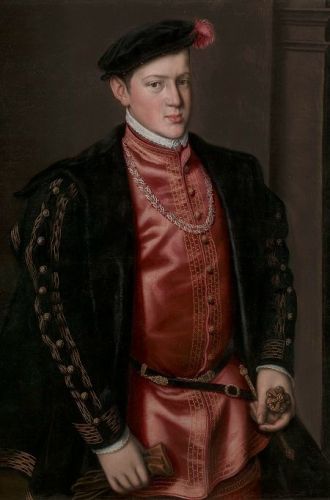 That left just one daughter and one son; Maria Manuela, and Felipe. There was more heartbreak for John and Catherine when Felipe died in April 1539. A sixth son, Antonio, had been born the month before but he then died at ten months old. This was an extremely high death rate for a royal family, and like nearby Spain (which also developed an heir problem) was probably due to repeated generations of inbreeding. Portugal had frequently married members of the Spanish royal family, particularly from its neighbouring kingdom of Castile.

Although he survived infancy there was no denying that Joao was a sickly child, and even in adolescence his health never gave his family much hope. At the age of three it was reported that although he could clearly hear without issues he was still unable to speak. Despite this Catherine was determined that both Joao and his only sister Maria Manuela would be properly educated. She established a library of various works and hired female tutors for her daughter.

Although Joao’s education would have been directed by his father there’s no reason why he would not also have been taught by some of the best teachers of his time. The demands on the future king would have been great. Under King John the Portuguese empire was expanding. It was under his reign that the Portuguese began to settle an area of South America now known as Brazil. This followed the establishment of trade with (and attempts to convert) peoples on the east and west coasts of Africa, and missions had been sent out to Asia.

Like his cousin Philip II of Spain, Joao would have a kingdom that stretched across the globe. The stress on Philip and his father Charles was immense, to the point where Charles chose to abdicate and let his son take over. But Philip was a relatively healthy young man, Joao was not.

Despite his poor health Joao survived into his teens and that meant that a marriage needed to be arranged. Although it might have been more sensible, genetically at least, to marry outside the traditional routes the bride who was picked was Joao’s double first-cousin Juana of Austria. Juana’s mother Isabella was a sister of King John, just as Joao’s mother was a sister of Juana’s father Emperor Charles. At the same time it was agreed that Joao’s sister Maria Manuela would marry Juana’s brother Prince Philip.

A proxy marriage ceremony was held in January 1552, with the bride eventually arriving in Portugal for the official ceremony in November. She was sixteen, the groom was fourteen. Juana fell pregnant several months after their wedding and the court grew excited at the prospect of a new heir, hopefully one who would have better luck than most of Joao’s siblings.

However, Joao’s fragile health took a turn for the worst. On 2nd January 1554 he died at Lisbon, possibly from tuberculosis. If this was the case then it would explain his health as a child, he may have been infected with the disease within months of his birth.

The family went into mourning so there were muted celebrations when Juana gave birth on 20th January. But there were celebrations to be had, the baby was born alive and it was a boy. The little prince was named Sebastian and from the moment of his birth was heir-apparant to John’s throne. He became King at the age of three when John died. Within months of his birth Juana had to leave for Spain and never saw her child again. Sebastian was raised by his grandfather until the age of three, when the King’s death meant that he became King and his grandmother Catherine became regent.

Although Sebastian was in better health than his father his life fared little better. He never married or had children and was killed in battle at the age of twenty four.