This month's “Desperately Seeking Sons” candidate is King Baldwin I of Jerusalem.

Only the second King of Jerusalem, Baldwin was married three times during his life, and even courted controversy with his third marriage as his second wife was very much alive and very cross with how she had been treated. Historians have debated Baldwin's treatment of the women in his life, with some suggesting that he was homosexual (which may also explain why he doesn't appear to have fathered any children, legitimate or otherwise). But with so little information about his wives and their marriages, making a guess at his sexuality is difficult.

What we do know about Baldwin is that he was not born with a great inheritance and a crown in his future. He was the third son of Eustace II, Count of Boulogne, who was one of the Norman knights that travelled to England with William the Conqueror and was awarded extensive lands after the conquest. But even with lands in England to supplement Boulogne, there was little that would be left for Baldwin. Instead his family chose a church career for him, the typical path of younger sons who had no other inheritance. 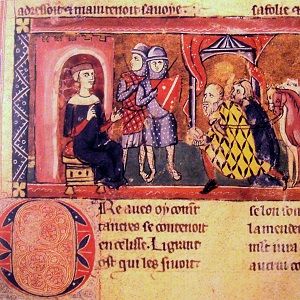 After spending several years studying for an ecclesiastical life, at some point Baldwin decided that he had no interest in becoming a Bishop and abandoned the training before he was ordained. Instead he married a Norman noblewoman, Godehild of Tosny, and settled down with her, possibly at his eldest brother's court. No doubt they were expecting a life of reward and advancement in western Europe, but then the recruiters for the First Crusade came calling and any plans they may have made together changed.

Godehild's origins are a bit of a mystery. She was of Norman origin and was from a noble family, but even the vaguest information about her year of birth is unknown. We don't know when she and Baldwin were married, how old she was when they exchanged their vows, or what kind of political or financial advantage she might have brought to the marriage. And as a result of this complete lack of information, we also have no idea of her personality, her appearance, or what their marriage was like.

When Baldwin signed up for the First Crusade, Godehild went with him. We don't know if she decided herself that she wanted to accompany him, or if he insisted she go along for the ride. As he was a younger son with no inheritance it's possible that they both decided it was in their best interests to move. There were more opporunities for Baldwin to make his mark, and if he managed to claim some lands for himself then it was best that Godehild went with him, instead of joining him later. Perhaps she didn't want to spend years sitting at home, waiting to hear if he was alive or dead. Perhaps they had a close marriage and the thought of being apart was too difficult for both of them to contemplate.

Whatever the motivations we know that Godehild accompanied her husband to the Middle East. They went as part of the army led by Baldwin's older brother Godfrey, which set off in August 1096. They took the land route, crossing through the Balkans and down to Constantinople. With such a large army of knights the rulers of the lands they travelled through became concerned that the army could be turned against them, and at one point Baldwin and Godehild were two of the hostages kept by the King of Hungary, to guarantee the good behaviour of the army.

They managed to catch back up with the army, and Baldwin is recorded as being at Constantinople. After some tension with the Byzantine Emperor Alexius I, the army moved on. But the journey was hard, supplies were running low and so many horses died that it became hard to transport people and goods. People began to fall ill, and one of those people was Baldwins wife.

Like the rest of her life, Godehild's death goes with barely a mention. We know that she died in October 1097 at Marash (now the modern-day city of Kahramanmaraş in Turkey), but she may have been sick for some time. Baldwin had been sent off to try and secure supplies for the Crusading army, but may have hurried back to her side when he heard that her health was failing. Historians debate whether they had any children, with some arguing that Steven Runciman incorrectly translated familia to mean family, when it really meant household. It's possible that some kind of epidemic swept through their entourage, Baldwin certainly doesn't appear to have had any children when he became Count of Edessa, suggesting that if Godehild had had children with him then they either died around the same time, or were left in Boulogne and died while their parents were away.

And again, Godehild's final resting place is an unknown, although since she died in a town rather than on the journey she was presumably buried in a nearby church. Baldwin did not have much time to mourn, the situation for the Crusading army was difficult, and he had to press on if they wanted any chance of succeeding.

As the first Queen of Jerusalem, we could probably hope that there would be a lot of information about Arda of Armenia, Baldwin's second wife. By the time he entertained a second marriage Baldwin had become Count of Edessa, in what is now modern-day Turkey. Edessa had a large Armenian population, who had rebelled and murdered their previous Count.

The reality is that we don't even know if Arda is her real name! Sources even seem to be confused about the identity of her father, but he appears to have been an Armenian nobleman, and an alliance with an Armenian family was helpful to Baldwin. Arda and Baldwin were married in 1097, with a dowry of 60000 bezants agreed with the groom and his father-in-law.

We have no idea how old Arda was, but since Baldwin was in need of children she was probably of childbearing age. That could be anywhere between fourteen and forty five, give or take a few years. As he was the Count of Edessa they probably resided in the County's main city – Edessa itself. Since Baldwin encouraged the rest of his retinue to marry local women, Arda would at least have had some ladies in her court who were also Armenian and shared her language and culture, as well as any surviving Crusader wives whose husbands were part of Baldwin's court.

In July 1100 Baldwin's older brother Godfrey died childless. Godfey had been named King of Jerusalem in July 1099, but hadn't quite managed a full year on the throne before his death. Naturally the throne fell to Baldwin, and he quickly moved to claim his inheritance. However Arda did not go with him. It's possible that the route was deemed too dangerous, Baldwin and his entourage were attacked at least once on the journey. It may also have been politically expedient to keep Arda in Edessa while Baldwin's replacement, another Baldwin, settled in to his new role.

Arda is believed to have journeyed to Jerusalem some time in 1101, and was probably taken by the safer sea route. While storms were a threat, they were less of a concern than a band of Saracens, or any disgruntled local Christian lord. Little is known about her life in Jerusalem, the city faced repeated attacks and Baldwin spent a considerable amount of time either defending the city, or leading an army out against whatever local threat had popped up.

What is clear though is that their marriage was childless. Sometime around 1105 it appears that Baldwin had grown tired of his wife. Reportedly her large dowry failed to materialise. Only a small portion had been paid and her father didn't seem inclined to find the rest of the cash. Some sources report that Baldwin had the marriage annulled, but others indicate that rather than a formal annulment Baldwin claimed that his wife had been raped on her journey from Edessa several years before, forced his protesting wife in to a convent, and then used her “retirement” as an excuse to declare their marriage officially at an end.

Arda was pissed off, but there was little she could do. She was eventually released from the convent and is believed to have travelled to Constantinople, where her family now resided. Baldwin not only considered himself free to marry again, but was already looking for her replacement.

It appears that Baldwin's choice of his third wife was motivated entirely by a need for cash, and lots of it. Soldiers cost money and Jerusalem's treasury was empty.

Adelaide del Vasto was tentatively suggested to the King. Believed to have been born around 1075, at the age of fourteen she had married Count Roger I of Sicily and had two sons and a daughter with him before his death in 1101. Roger's death left Adelaide as Regent of Sicily while their sons grew up. Sadly their eldest son, Simon, died in childhood but their second, also named Roger, proved to be more robust. By 1112 young Roger was a strapping seventeen year old and considered perfectly capable of managing Sicily on his own without his mother's help.

The bride was 37 and the groom was probably somewhere in his 50s, and for both it was a marriage of political convenience. Adelaide would get to be a Queen and Baldwin would get her immense wealth. He was so desperate that he allegedly declared that she could name her terms for the marriage, and she responded that if they didn't have a son then she wanted him to acknowledge his stepson Roger as his heir. Baldwin quickly agreed and Adelaide got on a boat and set off for her new homeland.

It's hard to say if she was aware of the political storm that she was sailing in to. Not everyone in Jerusalem agreed with the marriage. In particular people protested against the match as Arda was still alive, making Baldwin still married and therefore his marriage to Adelaide bigamous. But the Patriarch of Jerusalem was happy to marry them, and so the wedding went ahead. In return for serving his King, the Patriarch was deposed by a papal legate.

By 1116 the Patriarch had managed to persuade Pope Paschal II to reverse the deposition, on the agreement that he annull the marriage. Baldwin had spent Adelaide's money and had little use for her. After a serious illness convinced him that he needed to confess the sin of bigamy he agreed with the Patriarch. Like Arda, Adelaide was furious at this poor treatment, but no one cared to listen. Ships were acquired for her and she was sent back to her son in Sicily. Baldwin may have tried to recall Arda to her rightful place, but she either refused or may have died in the meantime, either way she did not return.

Baldwin died childless in April 1118, and Adelaide herself died a few weeks later. The news of Baldwin's death may not even have reached Sicily by the time she passed away. Arda's own death goes unrecorded.

However what is recorded is Roger's rage against Jerusalem. The insult to his beloved mother was too great for him to ignore, and for the rest of his life he refused to lift a finger to help Jerusalem despite their numerous pleas for aid and soldiers over the following decades.