Most of our Almost Queens have been robbed of their prospective crown by death, either theirs or their husbands. In the case of Blanche of Burgundy, cousin of Margaret of Burgundy, it was divorce because of her adultery that stopped her getting the crown.

Getting an annulment for a marriage could be quite tricky, especially if a Pope decided not to play along. Pity poor Joan of Valois then, who was not only completely blameless but couldn't even hope to be defended by the Holy Father.

Joan of Valois was born in April 1464 to King Louis XI of France and his second wife, Charlotte of Savoy. Poor Joan was not a healthy baby and may have had scoliosis, or perhaps one of her hips was damaged at birth. As she grew up she was reportedly “hunchbacked” and walked with a limp, the same statements that were later made about King Richard III of England, whose skeleton shows signs of scoliosis.

Joan's mother Charlotte gave birth to eight children, but in the end the sickly Joan was one of a small number of survivors, along with her older sister Anne and younger brother Charles.

As with many medieval children, Joan was fostered by a noble family who helped raise and educate her. Through them she became a deeply committed Catholic, and spent hours in the family chapel praying and taking part in services. She was particularly committed to the Virgin Mary, and reported that she once had a vision in which the Virgin told her she would one day found a religious order in her honour. 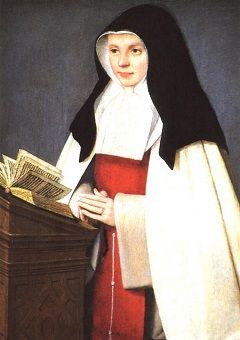 But religion had to be put on hold for more practical matters. With just one surviving son Joan's father King Louis was aware that his family's hold on the French throne was potentially precarious. Women could not inherit the throne, so if Charles died without heirs the crown would pass to his nearest male cousin. In this case the candidate was another Louis, Duke of Orleans. Joan was just twelve when she was married to her fourteen year old second cousin. There is a suggestion that this was done deliberately, as her physical problems could mean that she was unable to bear children, and thus Louis' line would be extinguished. Given that she was only twelve, it's hard to say for certain what her fertility capabilities would be.

As you would expect, the marriage was not a happy one. Louis resented his clever wife and seems to have spent as little time with her as possible. She on the other hand may have been taking their marriage vows far more seriously. She frequently forgave her husband for his appalling behaviour, and when he was imprisoned for rebelling against her brother she did her best to not only protect his lands and rule them well, but she also begged her family to free him.

Sadly for Joan her brother Charles died in 1498, leaving behind a childless widow, Anne of Brittany. The Duchy of Brittany had been independent for centuries, but Anne's marriage was supposed to bring it under the control of France. Charles' death meant that Anne and her Duchy were once again free from French control. But under the terms of her marriage Anne had to marry Charles' successor if he died without sons.

Louis desperately wanted to retain Brittany for his new crown, but he and Joan had been married for over twenty years. Anne wanted to protect her Duchy, so she came to an agreement with Louis – she would marry him in line with the terms of her marriage agreement with Charles, but only if he managed to get a divorce from Joan within a year.
Perhaps Anne was counting on Louis struggling to get the annulment in time. These things could take years to sort out, especially if the soon-to-be-ex-wife didn't play along. And Joan certainly was not willing to play along and go quietly.

Louis clearly had no care for Joan's feelings. His application for a divorce focused on two key areas; the first that he had been forced in to the marriage by Joan's father, and the second that the marriage hadn't been consummated, either because Joan's body disgusted him, or because of witchcraft.

A meeker wife might have acquiesced quietly, but Joan was a Princess of France in her own right. She had been incensed by Louis' unpleasant descriptions of her body, detailing how she so disgusted him that he couldn't possibly have sex with her. Or maybe she was feeling particularly put upon, after all the years defending him and advocating for him with her family, her reward was to be cast out. Her defence brought forward witnesses who claimed Louis had boasted about having sex with his wife several times in one night. It's interesting that many years later, witnesses to a Royal man boasting about his prowess in bed would also be brought forward for another Royal divorce. When Henry VIII of England was trying to divorce Catherine of Aragon, witnesses claiming his brother Arthur had told his friends that he had spent the night “in the midst of Spain” were brought in to court.

But as with Catherine and Henry, Joan came out the loser. Pope Alexander VI (the Borgia Pope) needed French help, and was not about to piss off a new French King. The annulment was granted within the requisite year, Louis married Anne, and Joan was granted the title “Duchess of Berry” and packed off to quiet obscurity. She had never been crowned as Queen of France.

From Princess, to Nun, to Saint

Free from a man who resented and neglected her, Joan turned her considerable talents to founding her own religious community. The Order of the Annunciation of the Virgin Mary (the moment where Mary was visited by the angel Gabriel and told she would bear God's child) was established in the city of Bourges in the early 1500s, with the same Pope Alexander approving the rules she created for it in 1502. Joan herself officially took the veil in 1503, committing herself to the convent and a religious way of life. The convent buildings were begun soon after, but poor Joan didn't live long to enjoy her newfound passion. She died in February 1505, and was buried in the Order's chapel.

Peace didn't reign long for Joan. In May 1562 Bourges was ransacked by rebelling Huguenots. After breaking in to the convent buildings they dug up her remains, which were found to be uncorrupted, and promptly burned them. In 1631 the process of canonising her began, with people claiming to have been healed by her. She was officially declared as Saint Joan of Valois in 1950.

All didn't end well for Louis either. He and Anne of Brittany also failed to have any sons, with just two surviving daughters. After Anne's death the ageing King, as desperate for a son as his cousin Charles had one been, married the English princess Mary Tudor. He died three months later, reportedly exhausting himself in his (unsuccessful) efforts to get an heir on Mary. The French crown once again skipped to a cousin, who became King Francis I of France.