Technically an “Almost Empress” instead of an “Almost Queen”, Isabella of Parma came very close to becoming “Holy Roman Empress” before being struck down by smallpox.

Despite her title “of Parma”, Isabella was born in Spain in December 1741 at the court of her grandfather, King Philip V. Her mother Elisabeth was the eldest daughter of King Louis XV of France, while her father Philip was a younger son of the Spanish king. Ten years after her birth Isabella was joined by a brother, Ferdinand, followed by a sister named Maria Louisa nearly a year after Ferdinand.

Unlike some of her predecessors, who left France forever, Elisabeth returned to Versailles several times between 1749 and 1759, primarily for political negotiations, but also to mourn the death of her twin sister Henriette in 1752. Given how close she was to Isabella it's quite possible that she took her daughter with her on some of these visits, giving her a rare connection to her maternal grandparents. 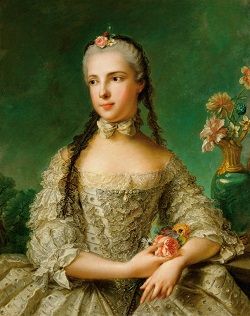 But all that came to an end in December 1759, when Elisabeth contracted smallpox and died. The news may not have been delivered to Isabella in the most tactful way. It certainly upset her deeply, she reportedly fell to her knees and prayed to God to tell her when she would also die. A nearby clock then chimed four times, convincing her that she had only four days to live. After passing several other fours, she decided that she would die after four years.

One of her mother's last acts had been to help arrange Isabella's marriage. France, Spain and the Holy Roman Empire had a whole host of royal children and grandchildren waiting in the wings, who could be moved in to place like chess pieces. Isabella was one of those pieces, and her intended groom was Joseph, the eldest son of Maria Theresa of Austria and heir to the Holy Roman Empire. Only nine months older, Joseph was considered to be an excellent choice for Isabella. Or at the very least the possibility of the title “Holy Roman Empress” was an excellent choice for her.

Isabella was said to be thrilled by the proposal, or at least she certainly graciously accepted. However Joseph was initially less inclined towards his future bride, telling one friend that he would never love her, but would at least try to get her to like him.

The first ceremony, a marriage by proxy, was held in Padua in September 1760. Isabella was then packed in to a carriage and dispatched to Austria, accompanied by escorts sent by her new husband's family. When she arrived in Vienna her father-in-law, Emperor Francis, was waiting for her. Francis escorted her to Laxenburg, where she finally came face to face with her husband, and her indomitable mother-in-law. Luckily Joseph's original reluctance soon fell away. Isabella was declared to be beautiful, and he soon fell in love with her. The second marriage ceremony was performed in October in Vienna.

At first things were considered to be quite successful. Maria Theresa enjoyed her daughter-in-law's company and the rest of the Austrian court soon fell in line with such thinking. Joseph adored her, Vienna was a beautiful city in which to set up home, and she appeared to have none of the problems with hostile in-laws that other princesses had to cope with.

But under the surface Isabella was a deeply unhappy young woman, and probably had been for quite some time. Rather than set up their own home, she and Joseph were expected to live as part of the Austrian court under the watchful eye of Maria Theresa, a difficult situation for any newly wedded couple no matter how friendly the wider family are.

On top of that Isabella didn't love her husband nearly as much as he loved her. Early on in their marriage she tried to adapt to his schedule and how he wanted things, but she soon found him overbearing and controlling (traits that would become clear to many others once he became Emperor). Their relationship wasn't helped by the possibility that Isabella wasn't actually heterosexual. The main person she was devoted to at court was actually Joseph's sister Maria Christina. The pair exchanged long love letters, with Isabella's side surviving in the Austrian state archives. Isabella declared herself to be “madly in love” with her sister-in-law, and hated the idea that the feelings weren't mutual. Whether Isabella was a lesbian or bisexual, such intense feelings for Maria Christina may not have left any room for Joseph.

Since her mother's early death Isabella herself had become obsessed with mortality and it began to show at the Austrian court, with frequent predictions and declarations that she would die young. When she became pregnant in 1761 her thoughts and fears amplified. She was convinced that she would die giving birth to her baby, not an uncommon worry for women at the time. But in Isabella's case it was an obsession, and it wasn't helped by her poor health during her pregnancy. Her first child, a daughter named Maria Theresa after the baby's grandmother, was born in March 1762. Isabella's health remained poor, it was six weeks before she was able to return to court life. But Joseph and the imperial family were absolutely delighted with the firstborn of the next generation, even if she wasn't the required male, and doted on the new baby.

Poor Isabella suffered two miscarriages before becoming pregnant again in 1763. Again she was convinced that she wouldn't survive, even telling Maria Christina that she would die before she could give birth to her child. She was even convinced that baby Maria Theresa would die in infancy, again not an uncommon fear but one that Isabella seems to have morbidly obsessed with.

In November that year, when she was six months pregnant, smallpox struck the royal family. Isabella fell seriously ill and ended up going in to premature labour. A baby girl named named Maria Christina, after her aunt, died hours after birth. After initially appearing to recover, Isabella herself died a week later. Her mother-in-law had nursed her herself during the illness and Joseph had rarely left her side. Her death was devastating to both of them. Despite this Maria Theresa was soon looking for a new wife for her eldest son. Isabella of Parma never became Holy Roman Empress, instead that title went to Maria Josepha of Bavaria. whose brief marriage to Joseph was utterly miserable.

And sadly as predicted, the infant princess Maria Theresa followed her mother to an early grave, dying of pleurisy aged seven.