Maria Josepha of Saxony was not the only “Almost Queen” of France. In fact 17th century France saw several women who missed out on the French crown due to their early deaths.

Maria Anna Victoria of Bavaria was a predecessor of Maria Josepha of Saxony. On her marriage to Louis “Le Grand Dauphin” in 1680 she became the first Dauphine of France since Mary Queen of Scots. All other French queens had married when their husbands were already King, so they skipped straight to the coronation and the title of Queen. 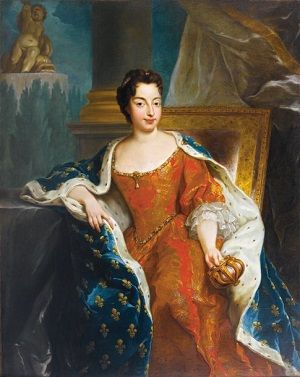 Born on 28 November 1660, Maria Anna was the first child of Ferdinand Maria the Elector of Bavaria and his wife Henriette Adelaide of Savoy. Henriette herself was the daughter of a French princess, Christine of France. The couple were only fourteen when they married in 1650, which is probably why it too so long for Maria Anna to come along.

Henriette Adelaide had been raised with a strong pro-French attitude thanks to her mother. It’s believed that her influence on her husband led to Bavaria eventually developing an alliance with France, one that was to be sealed with the marriage of her eldest daughter.

Unlike some Princesses, whose marriage was arranged at relatively short notice, Maria Anna’s betrothal was arranged when she was eight years old, giving her plenty of time to prepare. She was taught to speak French, as well as Italian and Latin, so she would be able to converse with her husband and his family from the moment she met them. She loved poetry and music, but had little interest in hunting – one of the key forms of entertainment and physical exercise for men and women of her rank.

The proxy ceremony that legally bound Maria Anna to the Dauphin took place in Munich on 28 January 1680. Sadly Henriette Adelaide, whose influence had led to the match, died four years before and never got to see her hopes realised.

Maria Anna met her new husband for the first time in March 1680. While the court were impressed at her fluent French, they were less impressed with her appearance. Described by the King’s sister-in-law as “terribly ugly”, poor Maria Anna (her name now changed to the more French-sounding Marianne Victoire) was at the very least considered to be rather plain. The French court demanded beauty, but Maria Anna had a forehead that was too high and a nose that was “bulbous”. She had no interested in gambling, the court’s favourite occupation, and the Dauphin was exceptionally keen on hunting, which she had no interest in. It wasn’t the best start.

At her marriage she became the second lady at court, after Queen Maria Theresa. She also became the centre of hopes for the future of the royal line. After two miscarriages her third pregnancy went smoothly, and Louis Duke of Burgundy was born in August 1682. As usual members of the French court were in the room to witness the birth, with the King walking his daughter-in-law around the room during the early stages of labour.

The Duke of Burgundy was joined by Philippe, Duke of Anjou in December 1683, and Charles Duke of Berry in 1686. With three healthy sons in the nursery Maria Anna could be satisfied that she had done what was expected of her.

The intervening years were marked by big changes at court. Queen Maria Theresa died in July 1683, making Maria Anna the new first lady of the court. There were certain expectations that came with this role. An ideal Queen of France was the centre of culture and amusement in the court, patronising artists and writers, creating an amusing social circle. Maria Theresa hadn’t been much good at it, and now Maria Anna disappointed the King too. Like the Queen she preferred to keep to her suite of rooms, chatting with her ladies and her particular friends, and attending the court only when really needed.

Her disinterest wasn’t helped by her health. Early miscarriages aside, she tired out easily and frequently took to her bed. Until his old age, and he was only in his mid-forties when his grandson came along, the King was in excellent health. As a result he appears to have viewed anything short of an obvious illness, such as measles, as hypochondria. Eventually he told Maria Anna, in no uncertain terms, that she was expected to attend court and form her own circle to keep the court amused, but she struggled.

The court also finally took up residence in the newly refurbished Palace of Versailles. However building works were still ongoing and Maria Anna reportedly annoyed her father-in-law further by complaining to him about the noise of the workmen. She was further put out by the arrival of the exiled King James II of England (James VII of Scotland) and his wife Mary Beatrice. Since Mary Beatrice was a Queen, albeit one thrown out of her country, she technically outranked Maria Anna who was technically a Queen-in-Waiting.

Generally Maria Anna doesn’t seem to have been thrilled by her life in the French court. King Louis was an exacting monarch, who found his daughter-in-law falling short of his expectations. Her husband had various mistresses during their marriage, and while they had three healthy sons it might have been the birth of the last one, Charles, that ultimately finished her off.

By April 1690 Maria Anna was on her deathbed. Her sons were brought in to say their farewells to their mother, with Maria Anna reportedly telling her youngest “you cost me dear”. She died on the 20th. An autopsy revealed that she had lung disease, the cause of the years of poor health that had been classed as hypochondria. She was buried at the Basilica of St Denis.

Not only did she never become Queen of France, but her husband never became King. Louis himself died of smallpox in 1711. He had secretly married his mistress Mademoiselle de Choin in 1695, her unequal status meant she was never recognised as Dauphine.