It’s rare that a royal mistress becomes a royal wife. Even rarer when the mistress isn’t from the nobility! By Karin Mansdotter wasn’t married to an ordinary King, and her fate wouldn’t quite be the same as other Queens.

Like Nell Gwyn, mistress of King Charles II of England, Karin’s origins are obscure. This isn’t helped by the need for contemporaries to use her as a way of showing King Eric was unfit to rule. She’s described as being the daughter of a soldier and peasant, who was spotted by King Eric selling vegetables in a market square. Eric was so taken by her beauty that he insisted she join his court, where she promptly became his mistress.

In reality it appears that Karin was already at court when she caught Eric’s eye, as she was a maid to the King’s sister Elizabeth. It’s possible that Elizabeth brought her in to her household after spotting her in the employ of a court musician. She was almost certainly not from the upper class, but she may not have had quite such humble beginnings as some suggested. 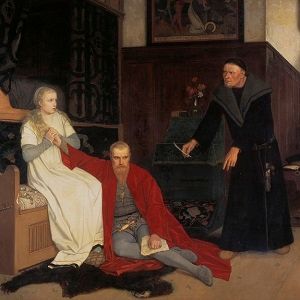 Eric had not been particularly lucky in the royal matrimonial game. At one point he had pursued the hand of Queen Elizabeth I, even sending his brother to England as an envoy to press his suit. Unfortunately for Eric this kind of thing suited Elizabeth perfectly. The prospect of a Swedish match was enough to keep her court and advisors quiet for a number of years, but it meant that the King himself couldn’t look for another wife. At least, not while there was the possibility of combining two crowns. Occasionally he tried moving on to Mary, Queen of Scots, and several German princesses, and then Elizabeth turned him down completely.

But by 1565 it was clear to the Swedish court that Karin had captured the King’s attention. She was given her own suite of rooms, a set of servants to run them, and showered with gifts of clothes and jewels. Unlike the French court, Sweden at the time had no official position of “Mistress of the King”, but it was clear to everyone that that was what she was. She even travelled with Eric when he left on campaign.

In October 1566 Karin gave birth to her first child by Eric, a daughter named Sigrid. Sigrid was not Eric’s first child, before Karin he’d had at least two other mistresses and they had both giving him children. But Sigrid was treated as a legitimate princess from birth, possibly a sign that Eric was already considering marrying Karin. The other mistresses had been discarded, and it appears that he was faithful to his latest paramour.

In 1567 Karin was pregnant again. On 29 December that year she married Eric in secret. The marriage was considered morganatic, a term meaning that the couple were not from the same social rank. In many areas of Europe a morganatic marriage was legitimate, but did not confer legitimacy on any children from the marriage. Several centuries later Queen Victoria would oppose the idea of one of her daughters marrying a man who was the son of a morganatic marriage. But such marriages weren’t uncommon, King Louis XIV is believed to have had a second, morganatic marriage to his children’s governess Francoise Scarron after the death of his wife Marie Therese.

The marriage could not have come at a better time. In January 1568 Princess Sigrid was joined by a baby brother, named Gustav after his paternal grandfather. The arrival of an heir may have spurred Eric on to make everything nice and legitimate. On 4 July he publicly married Karin at the Church of St Nicholas in Stockholm, and had her officially crowned as Queen the next day. Sigrid and Gustav were declared legitimate, and both were in the church to witness their parents official marriage and their mother’s coronation.

While in public it could look as if Karin had a classic rags-to-riches story, the reality of life with Eric was much darker. The King had suffered from periods of poor mental health for a number of years. He was paranoid and violent, quick to anger and difficult to control. 1567 had been a particularly bad year. Eric had become convinced that the Sture family were plotting to overthrow him and take the throne for themselves. He had several members of the nobility, including three members of the Sture family, imprisoned and put on trial. The wife of one of the Sture prisoners appealed to Karin to ask the King for clemency.

However while Karin reassured the woman that the King had promised not to harm the prisoners, Eric promptly went back on his promise.After stabbing Nils Sture himself he ordered the guards to kill the rest of the prisoners. He even ordered his men to murder his former tutor, Dionysius Beurreus, when the older man tried to calm him down. He then fled in to the woods where he was found several days later, dressed as a peasant and possibly still suffering hallucinations. A Regency had to be called to rule the country, and Karin spent most of the year caring for her lover.

Her public marriage and coronation did not win her many friends. The Swedish court was offended that the King had ignored their own female relatives to marry a woman who was, reportedly, the daughter of a common soldier. Eric’s own family were not particularly impressed by their new sister-in-law. The idea that a King could fall in love with an uneducated woman from a poor family was seen as suspicious, and there were rumours that Karin had used witchcraft to seduce the King. Witchcraft was also blamed on Eric’s madness, with hints that Karin had driven him mad in order to control him.

Witchcraft aside, it may have been Karin’s lack of influential family that appealed to Eric. Here was a woman with no real political connections, no father or brothers who could overthrow the King and rule through Karin and their children. She was also dependent on him, and therefore easy for him to control. While there’s no indication that he was cruel or unkind to her while they were together, their relationship only lasted a few years. She wouldn’t have been the first Queen in history to die on the orders of her royal husband if he’d had time to grow tired of her.

Sadly after her coronation the rest of 1568 didn’t go well for Karin and Eric. The King’s half brothers John and Charles joined forces and rebelled against Eric. He was deposed in September that year, and was imprisoned in the Royal Palace in Stockholm with Karin. Sigrid and Gustav were sent to live with their paternal step-grandmother, the dowager Queen Catherine Stenbock, but were returned to their parents in 1570. By this time the couple were moved to the Castle of Turku. They were moved again three more times between 1570 and 1573.

Although they were technically prisoners, Karin and Eric seem to have been held in “honourable captivity”. They had servants, their children had tutors, and the family lived relatively comfortably. Karin reportedly gave birth to two more sons, Henrik in 1570 and Arnold in 1572, but they both died in infancy. The birth of Arnold seems to have prompted John to do something about the risk of more heirs being born. In June 1573 Karin and the children were moved back to the Castle of Turku while Eric was kept in Vasteras Castle.

We don’t know how Karin felt about this move. Maybe she hoped it would protect her and her children. In 1569 a plot to free Eric had been uncovered, and while Karin wasn’t suspected herself at least two of her servants appear to have been participants, along with Eric himself. Maybe she was relieved to be kept away from any potential future plots. But on the other hand maybe she didn’t want to leave Eric. She certainly didn’t have any influence left with the court. In 1575 Gustav was removed from her custody and dispatched to Poland, no doubt to keep him out of the way and prevent any risk that he would rise against his uncle and reclaim the throne.

Eric died on 26 February 1577, reportedly poisoned by a bowl of pea soup on the orders of his brother. After his death Karin appears to have been treated kindly, albeit without the status and respect of a former Queen. She was given Liuksiala Manor in Finland as her primary residence, and accompanied her daughter Sigrid to Poland when the latter was appointed a Lady in Waiting to her cousin, Anna of Finland (this appointment was perhaps a sign from the King that Sigrid herself was no longer considered to be a princess). Sigrid would eventually marry a nobleman, Henrik Klasson Tott, and have three children with him. She followed him in to exile in 1599, only returning 4 years later when her husband had died. She married again 1609.

Karin herself lived quietly in Finland, where she was popular with the people, and maintained a careful neutrality during the Cudgel War between Finnish peasants and the Swedish kingdom. Occasionally she appealed to the court to allow her son Gustav return to Sweden, she only saw him twice after he was taken from her in 1575. But her requests were repeatedly refused and Gustav died a penniless exile in Russia in 1607.

On 13 September 1612 Karin died on her Finnish estate, which was inherited by Sigrid. She was buried at Turku Cathedral in Finland, her tomb topped with a small gold coronet.