Born on 5 August 1103 William Adelin would have been the first Anglo-Norman King, reflecting the changes in English society since the Conquest. While his father was King Henry I of England, the youngest son of William the Conqueror, his mother was Matilda (formerly Edith) of Scotland. Her mother had been a granddaughter of the old Anglo-Saxon kings, and had married King Malcolm III of Scotland in 1070. William Adelin might even have had a claim on the Scottish throne if he had survived. 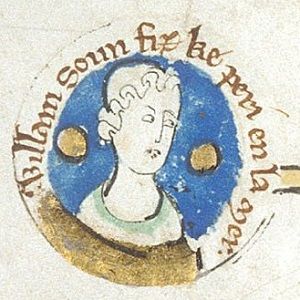 William’s Anglo-Saxon credentials were further enhanced by his birthplace, the old capital of Winchester, and his epithet. “Adelin” was a Normanised version of the old Anglo-Saxon word “Aetheling”, the name given to the heir to the throne. However his first name still indicated his father’s Norman origins.

At the time of his birth William had one older sister, also called Matilda. While King Henry had a large brood of illegitimate children, William and his sister were the only two legitimate children from his marriage. Whether this was by choice (some chroniclers claimed that the Queen was so pious she requested a celibate marriage after the birth of an heir) or through bad luck is unknown. But William seems to have been a healthy child so there was no need for his parents to worry too much.

Queen Matilda had received an excellent education at the convents of Romsey and Wilton and led a cultured, sophisticated court with her husband. She would have ensured that both her children received a good education themselves, although Princess Matilda was sent off to Germany at the age of six to await the crown of Holy Roman Empress. Details on William’s education are unknown, but he would have been expected to learn Latin and French. One small glimpse of family life can be seen in 1114 when Queen Matilda took her son to visit the newly founded Merton Priory. When Henry left England to visit Normandy in 1116 he left his wife as Regent, and charters from this time were also witnessed by William, suggesting that Matilda was helping her son learn the ropes through her supervision.

William’s mother Queen Matilda died in 1118. As William was now fifteen Henry appointed him regent, albeit with a council of advisors, during his absences. He also had a political role to play in alliances. Normandy’s long-term dispute with neighbouring Anjou frequently broke in to periods of war. In an attempt to secure Anjou’s loyalty William had been betrothed to Matilda of Anjou, the daughter of the Count, in 1113. The pair married six years later in 1119. Little is recorded of their relationship, but presumably they were happy together as after William’s early death Matilda refused to remarry, and joined a convent instead.

Following his wedding William spent a year with his father, travelling around Normandy and learning how to keep the peace in a region known for discontent and rebellion. In 1120 he became the nominal Duke of Normandy in order to pay homage for the Duchy to King Louis VI of France (Henry felt that as King it was beneath him to pay homage for anything). However, he never formally wielded power in the Duchy. However he was starting to be named as “king designate”, suggesting that to the chroniclers at least he was being lined up for some kind of dual-kingship system similar to that in France. The French monarchy tended to crown the heir during the lifetime of the father, it might have been Henry's intention to do the same.

Having lived a relatively healthy life until that point there was no reason to think that William would not become King William III. However the “White Ship Disaster” led to the death of William and several of his illegitimate half-siblings. William had managed to make it to the safety of the medieval equivalent of a lifeboat. But an attempt to rescue his drowning half-sister led to his boat being capsized and the heir to the throne drowned with the rest. His wife had been in a different ship otherwise she probably would have died too.

William’s death left his father with no legitimate male heir. Henry married a second time, to Adeliza of Louvain, but they had no children together. When Henry I died in 1135 the country was up for grabs and was claimed by both William’s sister, Empress Matilda, and their cousin Stephen of Blois.