Caroline Matilda was born into a court in mourning. Her father Frederick, Prince of Wales, had died four months earlier leaving his wife Princess Augusta a widow with nine children. The family had long been estranged from Frederick's father, King George II of England, but the Princes' death led to a cooling of tensions. Although George didn't like Augusta, and didn't like her reluctance to take part in court activities, she was generally left to raise her children as she saw fit.

For Caroline Matilda this meant a more secluded life than her father might have encouraged. Augusta hated what she felt was the corruption of the English court under her father in law, and was determined to keep her children innocent of the ways of the world. Caroline was clever enough to make the most of her education, and left her schoolroom with three languages under her belt, and the family's talent for music (her eldest brother George played several instruments).

In January 1765 Caroline Matilda was officially engaged to Crown Prince Christian of Denmark. Christian's mother was Frederick's youngest sister, making the betrothed couple first cousins. They were married in 1766, by which point Christian's father had died and he had gone from Crown Prince to King Christian VII of Denmark. In 1 May 1767 Caroline Matilda had her coronation in Copenhagen. 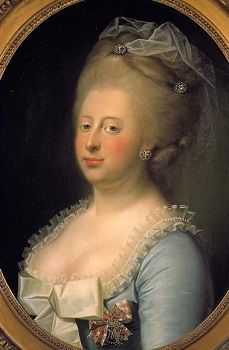 The marriage was unhappy from the start. Christian, who was already showing signs of mental illness, was resentful that he had been “forced” to marry by his court, and refused to consummate the marriage for months. Instead he took multiple mistresses, until he was finally convinced of the need to have an heir to the throne. Crown Prince Frederick was born in January 1768, and Christian returned his attention to other women. Caroline on the other hand now had a reason to fight for her place at court. She was disliked by her husband's courtiers and favourites, the Danish court was far stricter than the English one and her behaviour had scandalised the nobles. Like her brother George, Caroline was fond of walking and could be spotted strolling through the streets of Copenhagen, rather than taking the carriage that was traditionally used by Queens.

Christian's favourites did not endear themselves to her. Her favourite Lady in Waiting was dismissed, and although she rejected the first replacement she eventually had to accept the second choice. She was also rumoured to have had an affair with an actor in late 1768, but it's believed he was the lover of another of her Ladies in Waiting. Christian had embarked on a tour of Europe, and had the actor exiled on his return. Several other Ladies in the court were believed to be having affairs, and were accused of encouraging the Queen's “immoral” behaviour.

In reality it appears that Caroline's first and only affair was with the Royal Physician, Johann Struensee. Christian returned to Copenhagen in 1769 with Struensee in tow. Although Christian's mental health was getting worse, Struensee was generally able to placate him and keep him relatively calm.

Caroline originally disliked him. He encouraged the King to take a new mistress, but after this failed he turned to trying to improve the relationship between the King and Queen. He also helped treat the Queen when she suffered from dropsy, and successfully innoculated the Crown Prince against smallpox. Caroline and Struensee are believed to have been lovers from early 1770, although some in the court claimed they believed it started in late 1769. Wherever the King and Queen went, the Royal Physcian went with them. Working together Caroline and Struensee were able to have the King's malicious favourites banished from court. In December 1770 Struensee was a privy counsellor, and by the summer of 1771 he was given the same power as the King.

In the following months Caroline's unpopularity increased as she supported her lover's attempts to reform the country. It wasn't helped by her behaviour, she reportedly made little attempt to hide her adoration for Struensee. She also caused further scandal by riding horseback dressed in men's clothing, and had a portrait made of her dressed in the uniform of her regiment. Her mother-in-law, King Christian's step-mother, led the opposition party at court, while Caroline formed her own group of followers.

On 7 July 1771 Caroline gave birth to her second child. The baby girl was named Louise Augusta, and was named a Princess of Norway and Denmark. But the belief at court was that the baby should be called Louise Augusta Struensee. Despite the question of her paternity baby Louise would grow up close to her older brother Frederick, and was an accepted part of the Danish court.

The baby's birth seems to have been the last straw for the Dowager Queen. Rumours circulated at Caroline and her lover wanted to remove Christian from power and rule the country themselves. After another courtier gave the Dowager Queen evidence (now believed to be fraudulent) that the couple were plotting against the King she decided to act. In January 1772 Struensee and his supporters were arrested. The same night Caroline Matilda was captured with her daughter and removed to Kronborg Castle, where they were kept under close guard.

On 6 April 1772 the marriage of Caroline Matilda and King Christian was dissolved. Both she and Struensee had admitted their affair after weeks of pressure. Struensee was executed on 28 April, while Caroline Matilda's brother King George III of Great Britain had already begun negotiations with the Danish court for his sister. It was agreed that Denmark would return her dowry and provide a pension, and she would be able to retain her title. On 3 May she left Kronborg Castle, her final destination was Celle Castle in Hanover. Her children had to be left behind in Denmark and never saw her again.

Caroline Matilda led a life of retirement in Celle. She was visited by friends and family, including her sister Augusta. She had a library and a small theatre, and regularly donated to charities relating to orphans and children from poor families. She died suddenly from scarlet fever on 10 May 1775 aged just 23. At the time of her death she was involved in a plot to return her to Denmark to act as Regent for her young son, but her untimely death put a stop to it. She was buried near her great-grandmother, Sophia Dorothea, another woman exiled from her court and children.

Her son became King Frederick VI of Denmark, getting his revenge on his grandmother by siezing power and dimissing her ministers when he came of age. He was close to his sister, despite the questions about her paternity, and kept her as one of his most trusted advisers for the rest of his life.

Last month's Unlucky Princess was a double; Eleanor of Woodstock and Joan of the Tower!