You might have noticed so far that although the unlucky princesses have generally been unhappy in their marriages, none of them have specifically been murdered on the orders of their unpleasant spouse. 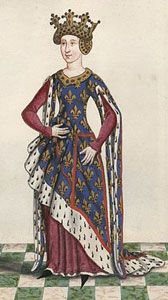 Born in 1339 in France, Blanche was descended from the French royal family on both sides. Her father Peter Duke of Bourbon was a great-grandson of Louis IX, while her mother Isabella (depicted on the right, there are no surviving images of Blanche) was a granddaughter of Philip III. Her half-brother Philip became King Philip VI of France and the first King from the House of Valois after Charles IV died without a direct male heir. Philip's claim was contested by King Edward III of England, who claimed the French throne through his mother, triggering the start of the Hundred Years War.

In 1353 Blanche was dispatched to the Kingdom of Castile in Spain to marry King Pedro. He had not had much luck with brides so far. His first betrothal had been to Joan of England, a daughter of Edward III. On her journey to her bridegroom she had caught the plague shortly after landing in Gascony and died before she even met her future husband. Pedro was reportedly controlled by his mother Maria of Portugal, and it was she who organised this second match as part of an alliance with France.

Pedro's feelings about Joan of England aren't known, but it's generally accepted that before Blanche arrived he had already moved on and fallen in love with Maria de Padilla. He may even have married her before Blanche arrived, but if so his mother soon put paid to it. He was forced to renounce any promise he might have made to Padilla and instead marry the French princess. The marriage was celebrated on 3 June 1353, Blanche was just fourteen years old and had had to endure the usual problems of a foreign princess. Saying goodbye to her family, travelling a great distance in various uncomfortable modes of transport, and now an arrival in a foreign land.

It quickly got worse. Three days after the marriage Pedro abandoned his new bride, declaring that she wasn't a virgin and the marriage should be dissolved. Blanche had been escorted from France by Pedro's illegitimate half brother Fadrique. They may have struck up a friendship on the journey or it may have been a plan by Pedro all along to get out of a marriage he didn't want. Either way he accused Blanche of having slept with Fadrique on the journey. Blanche was imprisoned and Pedro returned to Maria de Padilla.

Poor unhappy Blanche was locked up in the castle of Arevalo. In theory a foreign princess had a certain amount of protection from her birth family but the French seemed relatively helpless to assist her. An appeal to the Pope to excommunicate Pedro failed, in the end the French allied with the neighbouring country of Aragon. Pedro was faced with battles on the borders as well as rebellion from his illegitimate half brothers. He had Fadrique murdered in 1358 after he assisted another brother, Enrique, in his rebellion against Pedro.

In 1361 the Aragonese forces and their French allies were edging closer to Arevalo. Blanche, a valuable hostage, was moved to Medina Sidonia, where she suddenly died. Some accounts blame her death on an outbreak of plague, but many were quick to blame Pedro. He was accused of ordering her murder, by either poison or shot by a crossbow bolt. In some ways there was no point in killing her as it only served to anger the French more. On the other hand Pedro may have hoped that her death would leave him free to officially Maria de Padilla so he could have their four children legitimised.

Pedro himself was murdered in 1369 by Enrique, leading to the start of the House of Trastamara. His death wasn't mourned, he had betrayed every ally who had helped him over the years. Blanche was just another name to add to the list.