Henry Plantagenet is the only prince in the "Almost Kings" series that actually had a coronation. Known to history with the epithet "the Young King", Henry spent most of his short life feeling very hard-done by. 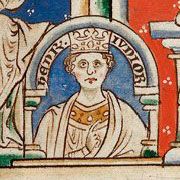 Born in February 1155, Henry became the the eldest surviving son of King Henry II of England and his wife Eleanor of Aquitaine when his older brother William died in 1156. Henry could have expected to inherit the vast Angevin empire, with borders reaching from Scotland to Spain and the Mediterranean sea. But Henry was joined by a whole host of siblings, including his younger brothers Geoffrey, Richard and John. His father, King Henry, wanted to try and ensure a balance of inheritance between his sons. Their mother, Eleanor of Aquitaine, wanted her lands to go to her favourite son, Richard, who was raised in the duchy with the anticipation that he would become Duke. Meanwhile the King's favourite son John was at the bottom of the pile and would have little to inherit, something that King Henry wanted to prevent.

Young Henry grew up in his mother's household until the age of six, and then joined the household of Thomas Becket until his downfall. After this he may have spent time in his father's household, before Eleanor appointed William Marshall as guardian and tutor to her eldest son. William would go on to gain a reputation as one of the greatest knights in England's history, and Henry was one of five kings to whom he would show unwavering loyalty and dedication.

As they grew older Henry was the only one who was firmly kept away from power and responsibility. Geoffrey was married to the Duchess of Brittany and allowed to rule in her name (as long as he followed what his father wanted). Richard was due to be given Aquitaine. But despite his requesting the right to rule Normandy, Henry was sidelined. He was married to Marguerite, a princess of France as the daughter of Eleanor's first husband King Louis, but even this prestigious match (arranged since their infancy) wasn't enough to placate the young prince. 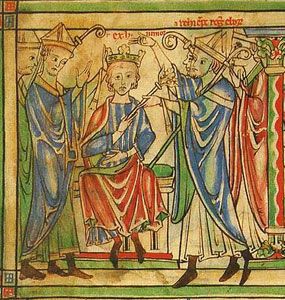 King Henry tried to mollify his son by having him crowned at Winchester. Crowning the heir to the throne while the current King was still alive was a French custom, not an English one, and led to tensions in the country. Even after the coronation Young Henry was still not given lands to rule and found himself constantly in debt. He was reportedly a handsome young man, with a quick wit, easy charm and a generous hand, the main reason for his debt was that he was keen to be generous to friends and supporters. Unfortunately he was also arrogant, and inclined to take the side of sycophants over his family. It may have been these negative traits that led to his father refusing to give him any kind of responsibility, the King didn't think his son was up to the task of ruling. But it eventually led to a rebellion in 1173.

Young Henry was joined in the rebellion by Richard and Geoffrey, who despite the inheritances that were granted to them were still chafing under the control of their father. All three were supported by Eleanor, and quickly gained support from the King of France and various groups who were fed up with King Henry's rule. The rebellion was defeated in 1174 and led to the Treaty of Montlouis, where Young Henry was granted an income (but still no responsibility) and his brothers were all confirmed in their previous roles. Eleanor had been captured and was imprisoned in England, none of her sons were able to persuade Henry to release her. Young Henry was also kept very close by until he managed to arrange an “escape” to the continent with his wife Marguerite. In 1177, while in France, Marguerite gave birth to a baby boy, who was named William and died three days later.

Young Henry spent the last few years of his life making friends in France and taking part in tournaments. He became a friend of King Philip II of France, even taking part in the coronation ceremony and joining in with the celebratory tournament in 1179. But he still wasn't content, and after an appeal for “aid” from a group of disaffected nobles in Aquitaine he led another rebellion, this time against Richard. He was desperately short of money, King Henry sided with Richard and cut off the Young King's allowance. In order to pay his mercenaries Young Henry looted monasteries and shrines, and in June 1183 he and his men stole the treasure from the shrine at Rocamadour.

Shortly afterwards Young Henry contracted dysentery. He was taken to the village of Martel, and begged his father to come to him so they could make amends. King Henry was persuaded that it was a trap, and instead sent a doctor and a ring to signify his forgiveness. He asked his father to forgive Eleanor and release her, and take care of Marguerite. William Marshall, who had also fallen out with Young Henry, was reconciled with his old friend and agreed to travel to the Holy Land on his behalf.

Young King Henry died on 11 June 1183 and was buried in Rouen Cathedral. He was the first and last English king to be crowned before the death of his father, and has never been included in the numerical list of Kings. The next King Henry would be the son of his younger brother, King John.