On this day in 1284, the Earl of Chester passed away. His name was Alphonso, he was ten years old, and he was the heir to the English throne.

It may be an unusual name for an English prince, but not for a Spainish one. The new prince, who was born in 1273, was the son of King Edward I of England, and so the newborn could have been expected to take his father's name. There hadn't yet been a prince Edward in this new generation, two previous sons had been named John and Henry (John had died a few years before, Henry would die in October 1274). But the Queen of England was Eleanor of Castile, a Spainish princess by birth, and she decided to name the new boy after her brother, King Alphonso X of Castile.

Very little is known about Alphonso's childhood, despite his status as the heir to the throne. Edward and Eleanor were a close couple, but history has 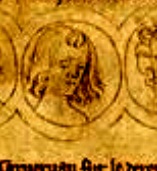 often raised an eyebrow over the way their raised their children. While it was common for high-born children to be fostered out to other noble families for their education, the Royal couple seem to have been more distant than was usual. However, Alphonso was their ninth children (out of a potential sixteen in the end), only three survived to see their new brother, and as mentioned Henry died eleven months after Alphonso's birth. It might be that Edward and Eleanor, rocked by so many deaths, needed to keep an emotional distance.

Various of Alphonso's siblings had been raised by their grandmothers, his older sister Joan spent her formative years with Eleanor's mother in Ponthieu in France, and when young Henry was dying it was Edward's mother, Eleanor of Provence, who was looking after him, as he had spent so much time with her that she was a better comfort than his parents. With Edward first on crusade, and then fighting the Welsh, it was Eleanor who accompanied him, while the children were left behind in the care of trusted servants and family members.

Despite not seeing much of his parents, it's highly likely that Alphonso had all the usual privileges of his rank. Once Henry passed away he was the only son for ten years, five sisters followed him (two died young) and another boy died within hours or days of birth. As his father's heir, he would have been expected to be well educated. At the time English wasn't a common language at the court, instead he probably would have learned French and Latin, and possibly Castilian given his family connections. He would also have been taught how to ride a horse, although he may have been too young to begin proper military training in weapons.

The fact that Alphonso survived longer than his two older brothers, and most of his sisters, must have given his parents hope that he would continue to thrive. Like his Royal siblings his marriage was political, Edward had him engaged to Margaret of Holland. One of the wedding gifts that was being prepared was the beautiful " Alphonso Psalter", now in the possession of the British Library. Sadly Alphonso fell ill and died at Windsor on 19th August 1284. He never met his bride, and the psalter project was abandoned for ten years, until his younger sister Elizabeth married Margaret's brother John.

One of the biggest questions raised in history is what kind of king Alphonso may have been. His death left the four month old Edward of Caernarfon as the new heir to the throne. As King Edward II, this little boy would prove to be an ineffective king, who was eventually overthrown by his own wife. On the one hand, Alphonso may have been a better king than his brother. But on the other hand, would Edward have been content to play second fiddle all his life, or would a civil war have erupted between two brothers, instead of husband and wife?