Last Christmas I got a lovely collection of history books, and I've recently re-read one by Elizabeth Norton. The full title of this book is "She Wolves: The Notorious Queens of England", and as you can probably tell it focuses on a cross-section of England's Queens. You won't find anything about Adeliza of Louvain or Jane Seymour in this book, instead Elizabeth Norton focuses on those Queens whose terrible reputation has been maintained down the centuries.

This book is divided in to several parts and from there in to chapters under titles such as "Incestuous Queens", "Arrogance & Pride" and "Witchcraft". 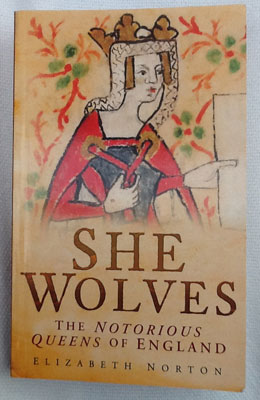 Some of these chapters encapsulate several Queens in one go, others are dedicated purely to one woman (such as "Witchcraft" which is about Joan of Navarre). Each part includes an introduction of a few pages before delving in to the chapters themselves, in total 19 Queens are analysed and discussed in this book, starting with the Anglo-Saxons and finishing with Mary I.

The book itself is an interesting read. Norton sets the Queens out in proper chronological order, which I much prefer over jumping backwards and forwards across centuries. Along with setting the background of each Queen discussing their actions, Norton also gives explanations for their actions and for the hostility of our sources. For readers that aren't used to reading about the medieval world, it brings you firmly out of the modern mentality of "women can do anything", and reminds you that while these women COULD do anything, they weren't actually supposed to.

I also like that Norton didn't just jump straight into post-Conquest England and instead wrote about some Anglo-Saxon Queens. While many people think that the English monarchy began solely with William the Conqueror, in reality there were plenty of Anglo-Saxon kings. The major problem with this is that Queens are generally ignored by the sources in those times, unless they were "Bad Queens". By including them, Norton reminds us that there were notorious Queens before 1066.

While I mostly enjoyed reading this book, where was something about it that just didn't sit right with me. For example in her summing up of Elizabeth Woodville she describes her as a "wailing Cassandra". Since Cassandra was a rather ineffective Greek "heroine", this epithet effectively casts Elizabeth Woodville in to the role of passive bystander, when in reality we know that she frequently took control of her own life and plotted against two Kings. It feels that with some of these women she is very quick to condemn them, and with others she takes all responsibility for their actions out of the women's hands, and places it firmly with the men in their lives.

Being pedantic I also dislike the minor inconsistency of the chapter titles. As said above, each chapter has a title such as "Witchcraft", with the exception being the chapter about Anne Boleyn. It's only a small thing, but it just seems a bit lazy, as if a new title just wasn't possible when "Witchcraft" and "The Seductress" had been taken by others.

Finally I felt that this book was just a bit too short. At 242 pages for these women it certainly isn't short, and yet several of the chapters seemed rather short for women who had led such varied and interesting lives.

Overall I think this is a good read, but perhaps it's better off as an introduction to some of England's Queens, than as a book for those of us who have already read plenty of other titles on the subject.