If you've read some of Philippa Gregory's latest works then you'll have seen the occasional mentions of Margaret of York. In "The White Queen" she's sent off to marry the Duke of Burgundy, and in "The White Princess" she is mentioned helping the pretenders that try to claim Henry VII's throne.

After doing some very basic reading on Margaret of York I realised that she deserved far more interest than just a footnote in some historical fiction, so I included her in Volume 2 of my eBook series. As part of my research I got hold of a copy of Christine Weightman's "Margaret of York: The Diabolical Duchess" and got down to some serious reading. 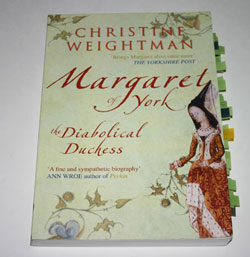 This book is a really good look at Margaret's life. It starts with her marriage to Charles the Bold, Duke of Burgundy, skips back to her birth and childhood, and then winds forward again to look at the rest of her life. Normally I'd complain about the time skipping, but this actually worked very well as it set the scene for the life that Margaret was about to marry in to, complete with descriptions of the sumptuous welcome and wedding festivities, and was then followed by the descriptions of a a young woman growing up in an England frequently at war.

At 201 pages of biography (plus the usual bibliography, index etc) this certainly isn't the longest book, but it doesn't skimp on details. Along with setting the historical context, Weightman also examines Margaret's personal relationships. She never had any children with her husband, but she was close to her step-daughter Mary and then played an important role in raising Mary's children. Weightman also looks at Margaret's popularity with the Burgundian population, and her political skill at negotiating with France after the death of her husband, before moving on to support Lambert Simnel in his attempt to claim the throne of England.

Weightman paints a rich picture of a woman who was politicially savvy and extremely popular. For many people her history is only interesting when it ties in to England's, through her attempts to oust Henry VII. But the rest of her life is equally as fascinating. Like many upper-class women in the Medieval period, she was sent abroad to marry a man that she barely knew. Unlike many women however, she never had children with her husband. But she still managed to carve out a prominent role in both domestic and international politics, something which was extremely rare for a childless woman in that time.

My biggest criticism about this book is the pictures. The book itself is printed on gorgeous high quality paper, making it quite weighty even though it's not very big. But the photos are printed in black and white. I'm sure this must have been a cost-cutting exercise, but frankly I'd rather have cheaper pages and colour images, especially for the portraits of the leading figures at the time. It's an expensive book at £15, I'd expect decent colour images as part of that.

Regardless of my preference for nice pictures, this is still a very good read. If you've ever wondered about Margaret of York, I'd recommend this biography (or if you want an overview you can buy Volume 2 of my ebook).