I must admit, when I heard about the plastic bag ban coming in to force in England I was a bit annoyed. I know it's been common in many co 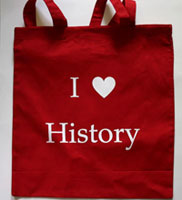 untries for a while, but it still seemed like a silly thing to me, probably becase I reuse my carrier bags constantly in supermarkets and then reuse them again as bin liners when they're coming to the end of their life.

But with the ban getting closer I started to wean myself off the plastic and move towards the tote. Luckily I recently started selling tote bags in the shop, so I decided I treat myself to one of my own bags and then I could at least give it a quality test-run and see if I could adapt to the change.

Luckily along with surviving all the books and potatos I dragged in it, carrying my new tote bag gave me some good reasons to encourage others to take them up.

1. They fold up well

My "main" bag is a big rucksack, which I originally bought when I started my BA (10 years ago, shhh!) to help lug my laptop around. Since then it has carried many other items, and now it has a tote bag permanently folded up and stored in the small pocket at the front. I also managed to fit it in to my handbag and a quick test found that it fitted in my boyfriend's jacket pocket. Plus they don't make that annoying rustling noise when you walk along, so bonus silence!

I mentioned potatoes and books, which makes my grocery list sound a bit mental. In reality I used my tote bag to carry books to and from the library and my flat. Occasionally I can get away with only getting two books in the library, which are quite easy to carry. But mostly I end up with large, heavy recipe books, a biography or two and some historical fiction paperbacks. Luckily the tote can easily survive the large, heavy stuff leaving my arms for the paperbacks.

Likewise the weekly food shop can include potatoes, which are a heavy nuisance but very tasty when cooked. I also buy pre-baked rolls, the packaging for which often pokes giant holes in carrier bags, which occasionally split. Now my lovely tote has no problems with pointy plastic, and it keeps my potatoes safe too!

3. I get to show off my history geekiness

With plastic bags all I get to show off is that I shop in Tesco and Waitrose. On top of that I also feel a bit embarrassed when I get the wrong bag out in the wrong shop. A Waitrose bag in Tesco says that I'm happy to get my Green Clubcard points for reusing bags, but it's not THEIR bags I'm reusing. In Waitrose using a Tesco bag just screams that I want to spend the extra money, but I'm worried about appearing too middle class to everyone on the District line. It's a bit of a minefield.

But now I simply get to show everyone that I love history, and in time I'll most certainly be adding ancient history and archaeology designs as well, at which point I'll either be carrying around three bags or making a very difficult choice over which really is my favourite.

When I was looking for bag suppliers I was determined to not get a neutral coloured bag. It might be a tiny bit more environmentally friendly, since it doesn’t involve the dying process, but I find them boring. I deliberately wanted something brightly coloured so it would stand out and look nice. Currently I have red in the shop but future designs will include purple, green and orange. Should make them easy to find as well!

It's incredibly annoying when you get a carrier bag and fully intend to reuse it, and then get home to find that a carton of orange juice has exploded all over the inside, or the pint of milk that you tried to keep upright has fallen over and leaked all over it. You could run the bag under the tap to try to wash it out, but it seems like rather a lot of effort for a piece of plastic that probably also has a hole or two in it, so you bin it even though you know it's not very environmentally friendly.

Tote bags on the other hand don't need to be run under the tap. You can just chuck them in the washing machine with the laundry and it'll come out in one piece, not smelling of old milk or oranges. I've run my one through the washing machine (I didn't spill milk on it, I just wanted to test it) and found that it survives a 60 degree wash! If you're really fussy you can even iron the back of it to get the creases out.

As you can see, there are plenty of fantastic reasons to start using tote bags! If history is your fandom then I'd highly recommend you check out my lovely red tote bags, and if you buy one and Tweet a photo of yourself with it to @CreateHistorian then I'll send you a discount code for 10% off your next order!